Field laboratory tests of the seeder under development with the intellectual control unit for the technological process of sowing non-loose grass seeds, consisting of a frame, seed box with sowing devices, attachment, sowing section, running gear and sowing device drive, were carried out on the territory of the University’s research and production campus, which was divided into plots 37 * 3,6 m in size.
The following parameters were adopted for the breadboard model of the seeder: speed of movement 7 km / h; seed placement depths of 2 and 4 cm. Aisle spacing of 30 cm was taken. The maximum and minimum seeding rate for the selected crop was defined.
An analysis of laboratory tests of the seeder showed that the sowing ability of the seeder is 8-30 kg / ha, while the unevenness of the sowing was 4,60% when sowing grain and 4,80% when sowing the awnless bun. The instability of the total sowing is 2,90% when sowing wheat grass and 2,7% when sowing the awnless bun.
The field germination of “Burabay” wheatgrass seeds in experimental plots amounted to 90%, and on the plot sown with awnless bun “Akmolinsky Emerald”, the germination rate was 89%; the uniformity of the seeding depth of the seeds of the prototype seeder is 6,28% in the sowing of wheatgrass, and the sowing of the awnless bun is 5,78%; the number of seeds embedded in the layer of average actual depth and two adjacent layers on the sowing of wheatgrass was 91% and on the sowing of awnless bun is 90%, which corresponds to agro technical requirements; when testing a prototype planter of the seeder, the distribution of seeds over the feeding area was 62% for the sowing of grain and 64% for sowing of the awnless bun.
An analysis of the results of laboratory field tests of the seeder showed that, according to the quality indicators of the technological process, the developed seeder meets the agro technical requirements for grass sowing and is not inferior to foreign seeders and it is necessary to conduct its extended field tests. 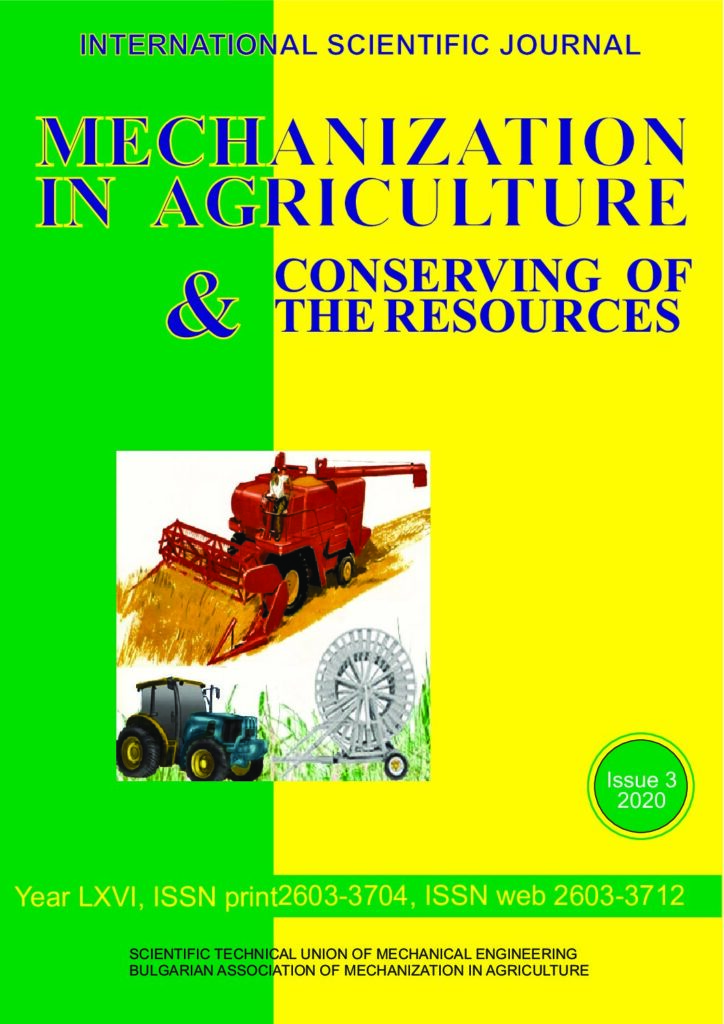 Mechanization in agriculture & Conserving of the resources
Vol. 66 (2020), Issue 3